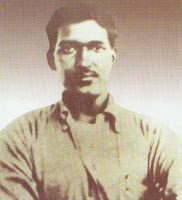 A very handsome revolutionary son of Mother India    Ashfaq Ullal Khan, was born on at Shahjahanpur U.P. in a  respectable &   known Muslim family. His birth was celebrated with a great pump& show. from his childhood  Ashfaq Ullal Khan started taking interest  in  the Freedom Movement & the activities of the freedom fighters moved his tender mind. He was a student of the at Shahjahanpur, one class junior to another great revolutionary PanditRam Parshad Bismil., a staunch Arya Samaji Hindu. Both of them made unparallel sacrifices for the Freedom Movement.

Ashfaq Ullal Khan left school during Khilafat Movement in 1920 to devote himself fully to educate his countrymen for the Freedom Movement. Many of his near friends advised him not to jump into freedom movement, which was full of difficulties & sufferings including jailed life & even death sentence. But Ashfaq Ullal Khan was made of different stuff, who had decided to sacrifice for the freedom of his Motherland.

To raise money for purchasing weapons for the revolutionaries it was decided (although Ashfaq Ullal Khan differed initially, but agreed with the majority decision) to loot a train carrying Govt. Treasury The train was successfully looted on between Alamnagar & Kakoi stations.  Among the train robbers were Sachinder Nath Bakshi; Rajinder Nath Lahiri; Pandit Ram Parshad Bismil & Ashfaq ullah Khan. The train robbery sent shock waves to the British administration & praises for the revolutionaries. Two close confidents of Pt. RPBismil leaked the information & got arrested some revolutionaries, but Ashfaq ullah Khan escaped  to Daltonganj in Bihar, where he succeeded in getting employment in  a school  posing as a Hindu of Mathura. But alas again a close confident of Ashfaq ullah Khan betrayed & got Ashfaq ullah Khan arrested. Ashfaq ullah Khan was brought to , tried along with Sachinder Nath Bakshi in Kakoi railway station case & sentenced to death. A day before his death he told, to his friends who came to see him in the cell, jokily that he was getting married next day.

Amar Shaheed Ashfaq ullah Khan was a true freedom fighter & a great secular. He saved an Arya Samaji  temple from being burnt by rioters. He said “All places of worship, irrespective of the religion, they belong to, are dear to life more than his life.” In his last prayer he prayed to God to bless Hindus & Muslims with better sense so that they don’t fight among themselves and work untidily for the Freedom Movement of the country .