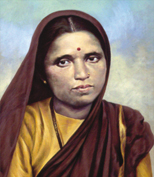 It is rightly said, “There is a lady at the back of very successful man”.it was so in the case of Goswami Tulsidass, Shatrarpati Shiva Ji Maharaj, Tilak, Gandhi Veer Savarkar, Mahatma Jyotiba Phule, Baba Sahib B R Ambedkar and may other personalities, who made history of sorts. The success of Dr. Ambedkar had incalculable contribution of his noble wife Smt.Rama Bhai Ambedkar, She was intelligent, kind, poise, obedient, chaste, religious, possessing high character, besides having simplicity of style and taste. This saintly lady although lived in extreme poverty but without a whisper of complaint on her face. Always turning her eyes towards God for the safety and prosperity of her husband. She was gentle by temperament, sober in manners, weak in constitution but modest in speech. Revered Ramabhai a sober and good girl came of a good but poor family. She was the second daughter of Bhiku Walandkar, a resident of Walang village near Dapoli in Konkan in central . He worked as porter at Dopli. He used to carry fish loads on his head from sea side to the bazaar. His earning was so meager that he could hardly make both ends meet. Dapoli is a place where child Bhim was admitted in his first school, when he was 5 years. Old, as his father Subedar Ramji Sakpal had migrated after his retirement. Rama bhai was born in 1898. her childhood name was Ramibhai and she has two sisters Gorabhai and Meerabhai and one brother named Shanker Dhutrey. Shanker Dhutrey also called Shanker Walangkar worked in a press. These unfortunate children lost first their mother & after some time their father too in childhood so were brought up by their maternal and parental uncle in (now Mumbai). Bhiva later called Bhimrao Ramji Dass Ambedkar and Ramibhai (later Ramabhai) were married when they were 16 years and 9 years old respectively: The marriage was ceremonised shortly after Bhim had passed his matriculation examination. The marriage pandal was an open shed of the Byculla Fish market in , after the days market was over. At night the bridegroom and his relatives were lodged in one spacious corner of the open shed and that of with her relatives in another corner. The small stone plate forms in the market served as benches, where a small gutter of dirty water flowed underneath their feet. The marriage place was vacated in the early morning before sunrise to enable the merchants to carry their daily business. The marriage was ceremonies with religious rites and jollity. Ramibhai was renamed Ramabhai after marriage and later earned the distinction of being called Mata Ramabhai Ambedker.

Rambhai Ambedker was illiterate at the time of her marriage but her husband later taught here simple reading and writing. Educationally there was world of difference between the two but they loved and respected each other from the core of their heats. Love, faith, sincerity, sacrifice and understanding links, between the two persons formed unbreakable chain to live happily, despite  both being ducationally poles aparts. Bhim used to call his wife affectionately as “Ramu” and she called him “Sahib”. She was deeply proud of her husband and Bhim respected here immensely. As Dr.Ambedkar was always busy in reading & could devote very little time for house hold affairs. At times she used to press here sahib’s feet in the evening, when he was reading & slept on the floor under his feet. But Ramabhai ensured that nobody disturbed him during this study or working. She cared for the health and welfare of her husband by all means.

When Ambedkar was in , she lived a life of destitute but without any regret. It is rare historical example of courage & conviction of a wife (Ramabhai) who used to make  cowdung cakes and carry bthe same on her head, to use them as cheap household fuel, despite tauntingremarks from neighbouring women folk, when her husband (Dr B R Ambedkar), also in acute financial crisis was struggling to obtain world’s highest Academic degrees including Doctorate of Science in foreign lands. Despite financial crisis for studies and at home. . Dr Ambedkar became Barrister reinforced by a London Doctorate of Science, an American Doctorate in Philosophy and Studies of Bonn University, which reflected immense sacrifices of his wife. When Ambedkar was preparing to go to for higher studies, the neighbouring women advised Ramabhai to stop her husband from going abroad, as he may marry a Mem (English lady) and desert her. But Ramabhai had unflinching faith on her sahib and replied to those ladies that’ she knew her husband well and he cannot do so”.

Despite Ramabhai‘s little education she was an expert housewife and knew well to run her house hold affairs. On getting money for monthly household expenses from Ambedkar she used to divide the money into 30 parts keeping  each part separately. Daily she opened one part and used it, so as not to run penniless on last dates of the month. Her economical habits and faith in her  husband, enabled the couple to get constructed their palatial house namely, Rajgrih in . But even after moving into Rajgrih, it did not affect her simple habits.

The wedlock of this ideal couple was blessed with four sons and one daughter, Out of his four sons namely, Ramesh, Gangadhar, yashwant and Rajratna and one daughter Indu only one son namely Yashwant Ambedkar (Father of Sh Parkash Abmedkar MP) survived, others died mostly in fancy. This gave the couple great pains and sorrows. On the death of his youngest son Rajratan on Ist July 1926, Dr Ambedkar wrote on 16th August to one of his friends, “There is no use pretending that I and my wife have recovered from the shock of our Son’s death and I don’t think that we ever shall. - - - - - - - with the loss of our kids the salt of our life is gone - - - - “ After a long period of mourning & on the insistence of his well wishers, Dr Ambedkar settled down on the work for emancipation of down trodden but Ramabhai Continued in grief. This acted upon here health badly and she fell gravely ill. She being highly religious even during illness, she continued observing fasts on Saturdays, took only water and black gram, worshipped God for His blessing on her husband. Her thoughts, mind and eyes were devoted to the service of her Sahib. At this she would say,’Sahib what is there in having so many Degrees, cannot we live happily with lesser education perhaps she did not know that the emancipation of million of untouchables was possible only with knowledge of order which Dr Ambedkar acquired before plunging into the war to breake the age old chains of slavery of his brethren.

On Ramabhai’s insistence and life long Dr Ambedkar took Ramabhai to Pandharpur for pilgrimage of Bithal Ji Maharaj, in whom she had lot of faith. But being untouchables they were not allowed to go near the temple, so they had to stand at a distance from the temple idol to offer prayers. It irritated the self-respecting Dr Ambedkar and he said “What of that Pandherpur, which prevents its devotees from seeing the image of God, by our own virtuous life, selfless service and spotless sacrifice in the cause of downtrodden humanity, we shall create another Pandharpur. Another Pandharpur ! He kept his promise by leaving Hindu religion and embracing Buddhism and re-establishing Buddha in His motherland after centuries. Illness at last over power the weak body physique of Rama Bai Ambedkar. She was even taken to Dharwal Bai Dr.Ambedkar for change, but this to did not help in improving her health. No medicine could give her relief and at last on unfortunate happen. She passed away at her residence.

Thus came the end of the nobility of mind and purity of heart. But fortunately Dr Ambedkar was by the side of her death bed. About 10,000 people rich and poor, educated and illiterate, important and common attended here funeral procession. Her son Yashwant Ambedkar preformed all Hindus ritees at the bidding of a Maha priest Sambhoo More, who was Baba Sahib’s colleague since their school days. After the death of Ramabhai, Baba Sahib was a completely broken person. Over a week he kept weeping like a child and it was difficult to console him. He put on a dress of a hermit and got his head tonsured. The saintly saffron robe indicated a hermit with world negating attitude. On the repeated requests & advice of his trusted friend and well – wishers he again took in his hand  the oar to sail across his suffering fellowmen and to cut their age old chains of slavery.