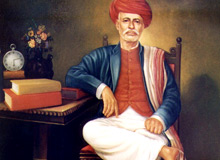 Ever since the Hindu religion got divided into castes rigidities and society got divided into low and upper castes, it has increases the miseries of the low caste people termed as untouchables or Dalits.All doors of progress, social, economical, educational, cultural were closed for the Dalits.They were denied the normal human dignities by their own brothers and sisters, who always looked towards them for all comforts of life but denied them the same. The Hindus offered milk to snakes; rice with sugar to ants; worshipped tress like Tulsi, Pipal, and animals like cows but got polluted by the shadow of a Dalit, who are non-else but the creation of the same God for whose realization Hindus observe extreme austere like living in lonely forests, undertake long journeys to 68 places of pilgrimage, observe fasts etc..But God is great and it sends its messages from time to time to show the masses the just path of love for all and hate to none.

A similar personality took birth on 11-4-1827 to revered couple Govindarao and Chimnabai in village Khanbari of Poona, who was named Jyotiba. He earned the title of Mahatma and title of Bukar T.Washington (American President and a great leader against acts of slavery & apartheid).Since
Gobindarao and his two brothers served as florists under the Pashwas, so they were called Phules.Chimnabai died when Jyotiba was 9 months old..Gobindrao wanted his son to get a higher education so as to spread the Gyan Jyoti for the humanity at large and Dalits in particular. But all relatives of Gobindarao were against the education of Jyotiba and so Jyotiba was taken out of school after he passed his primary school at the age of 9 years. Despite this Jyotiba continued working in fields during day and reading at night by lighting kerosene lamp. On the insistence of Goffar Beig Munshi ( A Muslim )and Latiz Sahib(AChristian) as both had great influence on Gobindarao who  got admitted his son in Scottish Mission High School at Poona in 1891.Jyotirao completed his secondary education in 1847 and decided not to accept any government job but work for the upliftment of downtrodden and deprived section of society and to spread education among them.

One day when Jyotibrao accompanied the Barat of his Brahmin friend, but was insulted and abused by relatives of his friend as how a Dalit dared to take part in Barat( Marriage Party ) of a Brahmin. After this incident Jyotiba made up his mind to defy the caste system and decided to serve the shudras and women who were deprived of all of their human rights under the caste system.Jyotiba was married in 1840 to Savitribai.Savitribai Phule worked as the true disciple and co-missionary of her husband. They changed the history by opening a school on 1-1-1848 for girls in Poona where Savitirbai was admitted as first Student along with four Brahmin girls, one Maratha girl and sixth a shepherd family girl.Jyotirao Phule continued this school despite opposition from orthodox Hindus, who considered this act against their religion, as Hindu scriptures considered educating girls & Dalits as a great sin. Savitirbai received more education at home from his husband, who appointed her Headmistress of one of his schools. Even parents of Jyotiba did not co-operated & they turned him along with Savitribai out of their parental house, when the couple did not agree to desist from their chosen path. They opened 18 such schools including some having co-education.

Feeling pity on the condition of orphans Jyotiba Phule opened   orphanage, perhaps first such institution by a Hindu. Jyotiba Phule gave protection to widows & assured them that orphanage shall take care of their children.  It was in this orphanage that a Brahmin widow gave birth to a male child in1873 and Jyotirao Phule adopted him as his son naming him Jaswantrao Phule & educated him to become a qualified doctor. To earn his livelihood & to run his schools & other institutions he worked as contractor in PWD.  He termed this department as hotbed of corruption.

He published his controversial book “Slavery,” in 1873 ,in which he declared  his manifesto  that he was  willing to dine with all irrespective of  their caste, creed, or country of origin Jyotirao Phule  formed “ Satya Shodhak Samaj on 24 th September 1873 & in 1876 it had 316 members. The main objectives of this organization were to liberate the Shudras, Ati Shudras & to prevent their exploitation by the Upper caste Hindus. He refused to regard Vedas as sacrosanct & denounced Chaturverna & instead published his book “Satya Dharma Pustak in 1891.  According to him all men & women were equal & entitled to enjoy equal rights & it was a sin to discriminate between human beings on the basis of sex or caste & creed Wodow remarriages werw banned and child marriage was very common amongthe Hindus Society Jyotirao opposed both & worked to benefit them and  got re married one Shayani caste widow on 8th march 1890 against  strong protests

He opposed the evil customs so on the death of his father he did not call his caste people for meal instead he distributed meals in beggars, distributed pencils, writing wooden planks ( Patties )  & books to children which became annual function to remember his father.  He opposed the tyranny of landlords & money lenders , so he organized a protest Dharna in Poona District where  farmers joined in large number 7 burnt the recorde of the money lenders. He got a marriage  ceremonised on 25 th December 1873 without the participation ob any Prohit. In the marriage feast the was only Pan & Supary nothing else. He edited  a weekly news paper “ DEEN BANDU ,” from 1st January 1877. This became a very popular paper & Jyotirao Phule varied through it his mission of guiding his fellow persons against the evils of the society Jyotirao Phule helper getting released in1881 from jail Lok Manaiya Ganga Dhar Tilk &Goda Adkar who were sentenced for writing in their papers “ The Kesri & the  Maratha ,”  against the policies of the British Govt.

For the life long service to the Dalits & other deprived section of the society Jyotirao Phule was awarded the Title Of MAHATAMA.  On 19 th May 1888. The function was attended  by degneties like Justice Ranade, Dr. Bhandarkar , Tukaram Tatiya , Lokhande, Dholey & Bharkar besides . Jyotirao Phule was  addressed by  Saya Ji Rao Gaikwardas Bukar T Washington in his letter to the president of the function.

Jyotirao Phule got his right hand incapacitated in an illness, so he stated writing with his left hand & wrote a book titled as “ SARIVJANIK SATYA DHARAM , “ After ceaselessly working for over 63 years Jyotirao Phule passed away on 28 th November 1890 about 138 days before the birth  of Dr. BR Ambedkar another luminary, Father of free India’s Constitution , & worked lifelong for the emancipation of Dalits , depressed, week  & women Jyotirao Phule shall be remembered for the centuries to come for the  good work he did for the Dalits & Depressed peoples of society.

The life size statue of Jyotirao Phule was installed in the compound of Indian Parliament on 3rd of December 2003, near the Statue of Baba Sahib Bhimrao Ambedkar

Jyotirao Phule said illiteracy the ill of all ills that lack of education causes lack of intellect which in turn  causes lack of moral resulting in stagnation promoting   further  loss of riches  and fortune which caused fall of Shudras. So ban of education to Shudras caused their all round degradation
Posted by Hem Raj Phonsa at 3:04 AM