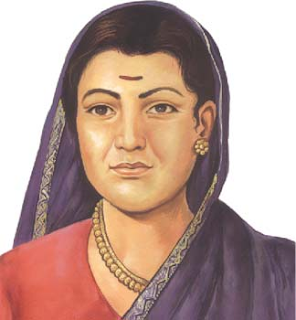 The first women known in the Indian history which lived and died for the social upliftment of down trodden. Her name was Savitribai  who was born on 3rd of January 1831 in Naya Ganj , Tehsil Khandala ,District Satara of Maharashtra. Her father’s name was Khado Ji Nevse Patil . At the time of her birth, no body could realize that the small ray of light which had descended on the earth in the form of Savitribai shall become a torch bearer for many, who were suppressed, illiterate, ill fed , ill clothed and a lightening for suppressors and oppressors inflicting tyranny in the name of caste and sex, on millions

During the spread of Cholera in Maharashtra in 1897 she opened a number of helping centers for all sufferers in rural and urban areas. She used to carry patients personally to the clinic of her son Yashuwant, who cured hundreds of them free of cost.
While carrying personally a cholera ridden Mahar boy to the clinic of her son and to get him admitted there, she got infected from the Mahar boy and she died of cholera on the 10th of March 1897.
We salute the iron lady who struck hard  to break the shackles of religious progeny, caste and dynasty to establish social order of Universal Brotherhood. She was first Indian women leader, who worked for the upliftment & dignity of women & children and was a staunch opponent of orthodox laws including Untouchability. She was mother to helpless orphans, a teacher to illiterates and solace to ill and suffering masses. She deserved to be honored as “Mother of Women Education in India”
She is even now a source of inspiration for establishing a rule based on equality, justice and fraternity. Let us draw inspiration from her life& works and re-dedicate ourselves for the service of down trodden and Dalits besides those sections of society who are deprived of equal opportunities of life.
Can be contacted on hrphonsa@gmail.com or Zenithrs@yahoomail.com
References:-
Posted by Hem Raj Phonsa at 6:47 AM