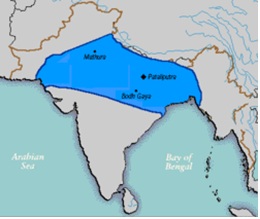 Mahapadma Nanda a barber by caste established The Nanda Dynasty or Nanda Empire in the territory of Magadha.Nanda Empire was one of the famous Ancient Indian Dynasties. It ruled in India at the time of 4th and 5th century BC. During the peak of its glory, the Nanda Dynasty had its stretch from Punjab to the west to Bengal to the east, and in the distant south upto the Vindhya Mountain Range.
He conquered the dynasties of Panchalas, Aikshvakus, Haihayas, Kasis, Asmaka, Kalinga, Maithilas, Kuru, and Sursenas and added these provinces to Magadha. Mahapadma Nanda is also refered as Smarat (King with wide territory and acceptance) Ugrasena( Terribly strong) or Mahapadmapati ( Most magnanimous Conqueror).

Mahapadma Nanda Was the first king of the Nanda dynasty. He was  also the first Shudra king of Magadha belonging to barber  sub caste of Hindu Religion classification.   Nanda Dynasty was established after Pradyota dynasty. Since Sisunga earlier a minister to the last Pradyota dynasty king and people made him the king.  Sisunga  belonged to the line of Bimbisara, so this dynesty is also called as Sisunga Dynasty. Mahapadma Nanda  has been described as "the destroyer of all the Kshatriyas". He  was the son of Mahanandin, a Kshatriya father from the Sisunaga dynasty and a Shudra mother.  Other Sons of Mahanandin from his Khatriya wives opposed the rise of Mahapadma Nanda, on which he eliminated all of them to claim the throne. The Indologist  F. E. Pargiter dated Nanda's coronation to 382 BCE, and R. K. Mookerji dated it to  be 364 BCE.Mahapadma Nanda established the first greatest North Indian empire having its power centre in Maghada. He vanquished the old dynasties of North by, dethroning all kings.The Nanda Empire at its greatest extent under Dhana Nanda circa 323 BC.Mahapadma Nanda is recognized as  most powerful  (Chhakervarti samarat ) king of the entire land. The collapse of the old Kshatriya dynasties under the rigorous power politics of Mahapadma Nanda, who is explicitly denigrated as the son of a Shudra, and he extended   support to followers of non-Vedic philosophies. But the Vedis philosophers described the rise of Mahapadma Nanda as a mark of Kali Yuga because of their religious hate and narrow mindlessness. He was the ruler of the Nanda dynasty for all but 12 years of the dynasty's  100 years Rule. He is reported to have enjoyed his life span of 88 years.

Mahapadma Nanda, defeated the Panchalas . Panchalas was an ancient region of northern India, which corresponds to the geographical area around the Ganges River and Yamuna River, the upper Gangetic plain in particular. This would encompass the modern-day states of Uttarakhand and Uttar Pradesh , Kasis, Haihayas(Malwa region includes districts of western Madhya Pradesh and parts of south-eastern Rajasthan), Kalingas (central-eastern India, which comprised most of the modern state of Odisha, as well as the Andhra region of the bordering state of Andhra Pradesh), Asmakas, Kurus, Maithilas, Surasenas and the Vitihotras; to name a few]. Due to his ruling qualities and military power he expanded his territory south of the Deccan plains too.                                                                                                                                                                         The Nandas are also described as the first empire builders in the recorded history of India. The Nanda Kings made the collection of taxes methodical, by regularly appointed officials. They had a strong administrative system. Their treasury was continuously supplemented to match the government expenditure. Nandas had large stock of wealth’s. The Nanda kings also built canals and in land water ways to establish an effective  irrigation system by digging new canals. On this, basis of a typically crop cultivation-oriented agriculture developed. Agriculture infrastructure was developed in a big way. The possibility of an imperial structure based on an essentially agrarian economy began to take firm roots in the Indian mind set.  This encouraged economy to develop on sound footing. This made their subjects prosperous in all fields of life.  They are reported to have developed standered weighing and measuring mechanism. The people enjoyed prosperous life conditions with out any danger from the out side invaders. Even the Great conqueror Alexander the Great (356 –323 BCE), did not dare to cross over present day Beas river to intrude into Nanda kingdom territory when he heard of  the military might stories from the natives.  The King Porus had also put up a brave fight against the Alexander army. But when intruding army heard of even mightier Nanda King’s army  , they refused to go across Beas river. So the bravest barber Chakervarti   Smart  forced the marching Alexander  army  stop from further  march so his loot and massacre of Indian masses was put to stop. Alexander’s dreams of conquering whole of India were dashed to ground by the Nanda smarat Dhana Nanda.

The Nanda King inherited the large kingdom of Magadha and wished to extend it to yet more distant frontiers. To this purpose they built up a vast army, consisting of 200,000 infantry, 20,000 cavalry, 2,000 war chariots and 3,000 war elephants (at the lowest estimates).[3] According to Plutarch, the Greek biographer the size of the Nanda army was even larger, numbering 200,000 infantry, 80,000 cavalry, 8,000 war chariots, and 6,000 war elephants (294,000 troops ).  Since the  military might of Nandas had spread far and wide so no king including the  intruder Alexander could dare to  invade Nanda territory. There for the Nandas never had the opportunity to see their army up against  even Alexander.  Nandas proved that preparedness for war is preparedness for peace and hormony. Alexander invaded India at the time of Dhana Nanda, and confined his campaign up to the plains of Punjab. Alexander’s forces were, frightened by the prospect of facing a militarily powerful enemy and so mutinied at the Hyphasis River (the modern day Beas River) refusing to march any further. This was the might of the untouchable kings. But alas their religious peers reduced them to be non fighting persons, so the country was enslaved for centuries.

The people enjoyed freedom of following the religion of their faith with out any fear. The people followed Jainism, Hinduism, and Buddhism. But the rulers of the Nanda Empire embraced Jainism. Once the Nanda rulers took over the kingdom of Kalinga, they made Pataliputra (Patna Bihar), their capital. Revered Jivasiddhi, the Digambar saint, was adopted as master by Dhana Nanda the last Nanda Samrat. Pataliputra was then known all over the world for being the place of enlightenment of Lord Mahavira and learning . Lord Mahavira propagated Jainism whose message was asceticism, austerity and non-violence. The Nanda dynasty rulers were also known for their appreciation of writing and art. They offered support to a number of academics and researchers. Panini, the eminent linguist, was born during this era.  The Nanda dynasty kings were great builders too. The majority of the stupas of Rajgir and at other major Hindu religious holy places were constructed during last Nanda ruler.

The Nanda dynasty was over run by the Chandergupta the founder of Maurya Dynasty. The Maurya Dynasty ruler ruled over India between 322 BCA to 185 BCE with Chandergupta as the founder to little after Ashoka the Great. It was Ashoka the Great, who himself converted into Buddhism, and it is in his reign that Buddhism spread to other parts of Asia. During the Mauryas, the Hinduism took the shape that fundamentally taught the religious principles which are followed even to the present day.

Mahapadma Nanda Smarat was the founder of a huge  Nanda Dynasty empire and was the first non-Kshatriya ruler of northern India during that  time. Following his extensive regime and demise, the kingdom was assumed by Pandhuka. Subsequently, a succession of rulers arrived and ruled over Magadha. Mahapadma Nanda Smarat shall be long remembered as a great just ruler during whose rule his subjects enjoyed the life benefits with out fear or favour. No foreign invader could dare to cross over to the Magadha territory with an evil eye.

2. Wikipedia, the free encyclopedia
Posted by Hem Raj Phonsa at 3:28 AM